By The Caucasus Tours


Price of the tour is based on DBL/TWIN rooms occupancy at 4 star  hotels:

Arrive in Baku, Azerbaijan. Transfer to hotel. Overnight in Baku 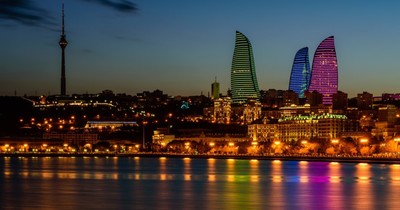 Panorama of the city presented to the height of the mountainous part of a television tower clearly gives an idea of the contrasts and the extent of Baku, the horseshoe bay of Baku. Later we explore the oldest district of the city – “Old Baku” or “Icheri Shey-Har” (UNESCO World Heritage Site) with its maze of cobbled streets and 12th century wall-stones. During the medieval period of Baku, such monuments as the Synyg Gala Minaret (11th century), the fortress walls and towers (11th–12th centuries), the Maiden Tower, the Multani Caravanserai and Hajji Gayyib bathhouse (15th century), the Palace of the Shirvanshahs (15th-16th centuries), the Bukhara Caravanserai and Gasimbey bathhouse (16th century) were built. In 1806, when Baku was annexed by the Russian Empire and the traditional architectural look of the Old City changed. Many European buildings were constructed during the 19th century and early 20th century, using styles such as Baroque and Gothic. Baku thus has an original and unique appearance, earning it a reputation as the 'Paris of the East'. This afternoon we visit the the Fire Temple, known locally as the Atashgah. 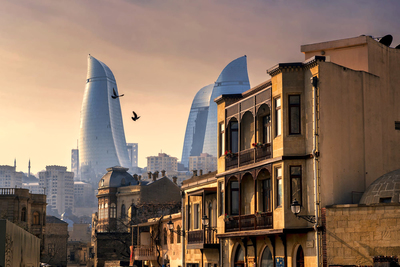 This morning we leave the capital and travel to Shemakha, for a long time the capital and trade centre for western Azerbaijan and now a small town. We briefly visit the Grand Mosque, a very large and attractive building from the late 19th century, Yeddi Gumbez 'Seven Tombs', yet only three of these desecrated octagonal royal tombs remain reasonably complete. They are 18th-19th century mausoleums of the Khans of Shemakha. We continue to Sheki, one of the most ancient settlements and architectural centers of Azerbaijan founded more than 2700 years ago. The setting here is stunning -- lying in forested hills with views of the Caucasus Mountains. On arrival we visit the mosaic-fronted Khan's Palace, a beautiful piece of Islamic architecture, and the History Museum. We will also have a walk through the busy market of Sheki.
Overnight in Sheki
Meal plan: Breakfast, Lunch 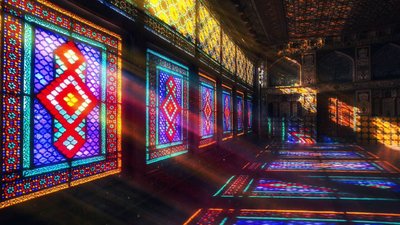 This morning we travel along the foothills of the Greater Caucasus range and arrive at the Azerbaijani-Georgian border at Lagodekhi. After completing customs and immigration formalities we continue to Kakheti, a famous ancient wine making area.Georgia is considered one of the ancient wine making centers. The Latin term for wine, “Vino”, is said to derive from the Georgian word for wine, “Ghvino”. The Caucasus has been the very place from which domestic grapevine spread to Europe, first to Italy and then to France, North Africa, and Spain. On the way visit Gremi Fortress, built in the XVI C, which was the capital of Kakheti region in the Middle Ages. Afterwards we drive to Nekresi Monastery complex, located in an amazing natural setting and finally drive to a local restaurant in Telavi, a cozy city in the heart of Kakheti with a large city wall. 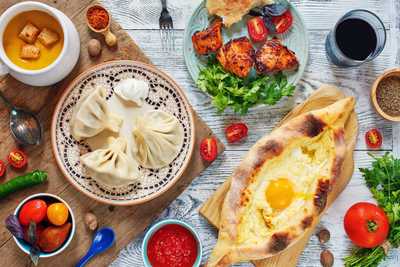 After breakfast we will visit Tsinandali– the summer residence of the noble Georgian family – Chavchavadze. The founder of this beautiful European style palace and gardens was the father of the Georgian romanticism – Alexander Chavchavadze. Later we will tour Sighnaghi "love town" - a medieval city located on the hills overlooking Alazani Valley and Dagestan Mountains (North Caucasus). Continue to David Gareji Monastery situated in the semi-desert in the region bordering with Azerbaijan. Founded in the 6th century by Assyrian monks, David Gareji is the largest monastery complex in Georgia and was once the royal monastery. In the 1616 the Persian Shah Abbas massacred 6000 monks and had the monastery sacked. The complex is known for it amazing frescoes and range of artistic and architectural styles ranging from the 6 – 18th century. Arrival Tbilisi. 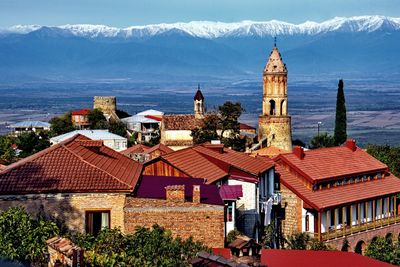 After breakfast we will start our exploration of Tbilisi, a city which has quite long 1500 years of history as a capital. The foundation of the city is related with the famous Tbilisi Baths – natural spring waters with sulfur. Baths’ district is nowadays the heart of the old town of Tbilisi. During our city tour we will visit this famous baths, also XVII C. Metekhi church situated on Metekhi Plateau. From plateau you can see Georgian, Armenian and Catholic churches, also Jewish Synagogue and Muslim Mosque side by side as a symbol of Georgian tolerance. We also visit Narikala fortress (by the cable car), Cathedral Sameba – which is the highest Orthodox Church and the oldest church of Tbilisi – Anchiskhati (VI-VII C). Next to the Anchiskhati is the oldest café of Tbilisi – “café Gabriadze” named after the famous Georgian film maker Rezo Gabriadze. We also visit the main avenue of Tbilisi – Rustaveli Avenue with the buildings of almost all the types of European Architecture of the 19th century (Baroque, Moorish, classical and even Stalinist architectural styles). Also we visit the National History Museum. 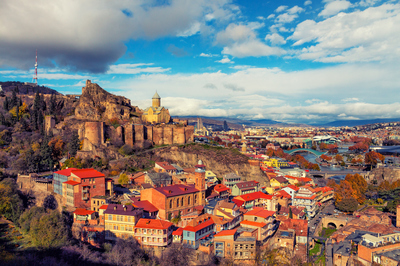 After breakfast we drive to Mtskheta (UNESCO World Heritage Site), the ancient capital of the Georgian Kingdom. Here we visit Jvari Monastery (6th c.) and Svetitskhoveli Cathedral built in the 11th century as one of the symbols of unification of Georgia. We will also visit the city of Gori founded by one of the greatest kings of Georgia, David the Builder in the 12th century. One of the “must see” places of Gori is the house museum of Joseph Stalin. After visiting that unique museum we drive to Uplistsikhe meaning "the lord's fortress". It’s an ancient rock-hewn town. Built on a high rocky left bank of Mtkvari River, it contains various structures dating from the 2nd ML BC to the Late Middle Ages. Back to Tbilisi. 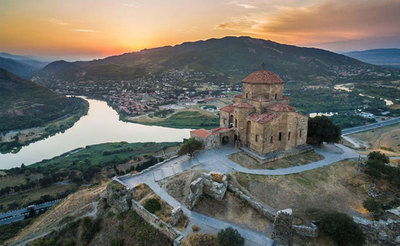 After breakfast drive to the Georgian – Armenian border at Sadakhlo. Change buses and guides. Driving through the picturesque Canyon of Debed River we visit the Monastery of Haghpat dating back to the 10th century. It’s a perfect example of medieval Armenian architecture. Being astonishingly well preserved with its frescoes, “lace” stone-crosses, inscriptions and bas-relieves it became the first Armenian architectural monument to be included in the list of UNESCO World Heritage Sites. Later we drive to Dilijan National Park, a protected area renowned for its serene lakes, picturesque hill trails and peaceful villages. Many poets used to say, "If there are woods, mountains, streams and mineral waters in paradise, it must be like Dilijan”. Due to its forested mountains and mild climate, Dilijan is named "Armenia's Little Switzerland". Take a stroll in the most beautiful part of the town, the restored Old Dilijan Complex on historic Sharambeyan street. Here we experience the town as it was in the 19th century. Continue to the Lake Sevan, the world’s second largest high altitude lake at 1900 m above sea level. Marvel at turquoise waters of the lake from the heights of the peninsula hill where we visit the 9th century Sevanavank Monastery.
Overnight in Sevan
Meal plan: Breakfast, Lunch, Dinner 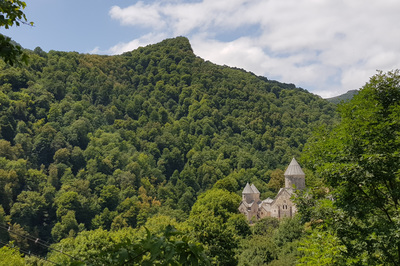 After Breakfast we will drive through Vardenyats Mountain Pass famous for its fascinating colorful mountains we reach the Orbelian Caravanserai along the Great Silk Road where you’ll see some remains of the real old road, small medieval bridges, hundreds of fresh water springs gushing from the rocks. Here little has changed since the fourteenth century. The Caravanserai offered hospitality to travelers along the highway crossing the Vardenyats mountains. Continue to Syunik region, the southern region in Armenia. Riding the world’s longest aerial tramway (5.7km) you’ll reach the miraculous Tatev Monastery, the most formidable monastic complex founded in the 9th century located on a rocky peninsula more than 100 meters above the Vorotan River. According to tradition the relics of the Apostles, Sts. Peter and Paul, were placed under the dome's supporting pillars. Continue to Goris town, one of the most beautiful towns in Armenia. It’s a town in orchards where the houses have the same unique architecture with red tile roofs and arched windows. The town is beautifully planned by a German architect in the 19th century. 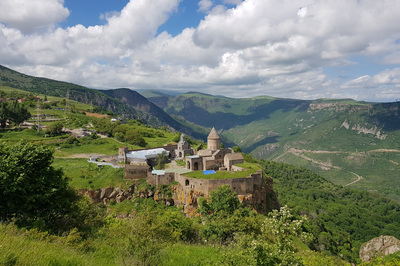 After breakfast drive to to Karahundj (Armenia’s Stonehenge). This stone circle, now shown to be a prehistoric observatory, long predates Stonehenge in England. Ancient inscriptions found here may mark the birthplace of the Zodiac – and of Western Civilization itself. Possibly it was the world's first astronomical observatory founded 7500 years ago. Continue to Vayots Dzor region, our next stop will be Noravank Monastery, an architectural gemstone nestled among brick-red cliffs, just above a deep gorge. Later we'll drive to Areni village, the cradle of viticulture. This is where the world’s oldest winery(6100 years old) has been found in the cave Areni-1. Winery tour and wine tasting. Drive to Ararat region, where we will visit Khor Virap Monastery, one of the most popular destinations in Armenia for a number of reasons, primarily because it is where St. Gregory the Illuminator was imprisoned for 13 years before curing King Trdat III of a disease. This caused the conversion of the king and Armenia into the first officially Christian nation in the world in the year 301. Its location, near the closest point to biblical Mount Ararat within Armenian borders, offers a spectacular view of the mountain, the national symbol of Armenia. Continue to Yerevan. 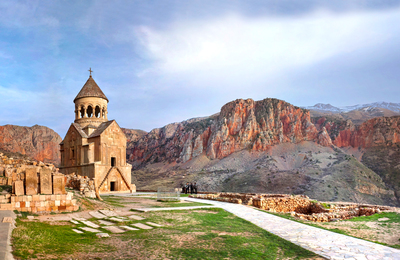 Today we explore Yerevan, the “pink pearl” of Armenia, a beautiful European city built with different shades of purple and pink tufa stone quarried in Armenia. Yerevan as one of the oldest continuously inhabited cities of the world has a history that dates back 2800 years. Walking down the Abovyan Street, one of the oldest streets in Yerevan which was on the Great Silk Road, we continue to Northern Avenue, Opera House, Ring Park encircling the downtown. We visit the birthplace of Yerevan – the Urartian Fortress of Erebuni, founded in 782 B.C. by the King Argishti I. A photo-stop at the legendary hero “David of Sasun” Statue. We'll have a panoramic tour of the city starting with the "Victory" Park offering a bird's eye view of the city. We also visit the Cascade which is a colossal white stairwell built on a Yerevan hillside in the 1970’s, with water fountains running down the sides, all reminiscent of a natural river or stream cascading. Afterwards a tour of food Bazaar “GUM” - a real museum of food. Get acquainted with the rich spiritual and cultural life of ancient Armenia at Matenadaran, a unique Research Institute and museum of ancient and medieval illustrated manuscripts. Marvel at the illuminated pages of some of those manuscripts within their glass cases. 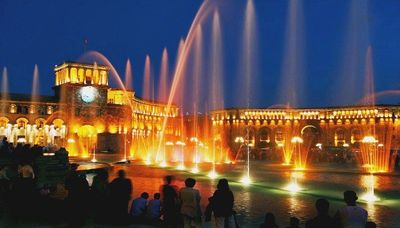 Leaving the frantic pace of the city we are heading towards Garni Pagan Temple, the only Hellenistic Temple in the Caucasus (and former USSR). Gracing the hillside the pagan temple was dedicated to the God of Sun, Mithra. It was built in 77 A.D. by the Armenian King Tiridates I in the territory of Garni Fortress. Then we proceed to Geghard Monastery, an incredible ancient Armenian monastery, partly carved out of a mountain. The architectural forms and the decoration of Geghard's rock premises show that Armenian builders could not only create superb works of architecture out of stone, but also hew them in solid rock. It is included in the list of UNESCO World Heritage Sites. Back to Garni village where we visit a local house and participate in traditional Armenian bread “Lavash” making in tonir (underground earth-stove). 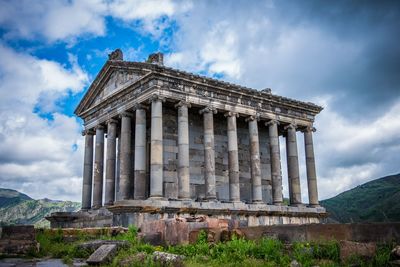 Today we embark on our journey to the lands of ancient treasures of Christian history…Vatican city of Armenia, Holy Echmiadzin with its world’s earliest Christian churches included in the list of UNESCO World Heritage Sites. Visit Echmiadzin Mother Cathedral originally built by Saint Gregory the Illuminator in 301-303 A.D., when Armenia became the first officially Christian state in the world. Afterwards visit the ruins of Zvartnots Cathedral. The remnants of Zvartnots, even in ruins, are a majestic sight... Back to Yerevan where we visit the open air market of Vernissage - the largest souvenir, arts & crafts outdoor bazaar in the Caucasus. 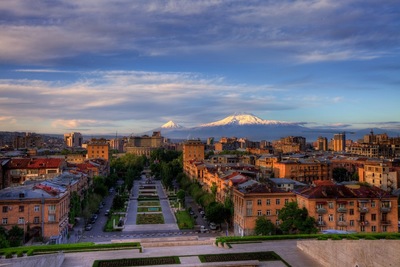