Burana Tower - Balasagun was a city in the Chuy region during the Karakhanid Khanate.  Excavations have revealed that the double walls of the settlement enclosed 30 sq km, including a fortress, many workshops, bazaars, a bathhouse, and a plot of arable land.  Water brought by a large pipe from a neighboring canyon.  As the Karakhanid rule was shaken by Mongol invasions, Balasagun began a slow decline, eventually becoming a ghost town in the 15th century.

Burana Tower is the most visible remnant of the old city.  Built in the 11th century, the tower is thought to have been a minaret.  It was originally double it's current height of 24.6 meters.  Historian's believe the top half to have been destroyed in a 15th century earthquake.

Chong-Kemin Valley - In the  Chuy region this small 500 hectare park covers an incredible range of terrain, from semi desert to glacier.  Trek the gorge and check out the extreme landscapes, and unique animal and plant life including the Tolai Hare, pheasant, and fir-needle ephedra.

Issyk-Kul Lake - the crown jewel of the Tien Shan,  Lake Issyk-Kul is 6232 sq m of sparkling blue paradise.  The second largest saline lake in the world, its name in Kyrgyz means "hot lake"-- though surrounded by spectacular snow capped peaks, the water never freezes.  Silk Road traders stopped here to recover from the grueling trek over the passes of the Tian Shan, and it is still the most popular destination in Kyrgyzstan to relax for both tourists and locals.

Song-Kul Lake - in Kyrgyz "the final lake".  Son Kul gleams like a brilliant sapphire on it's lush green mountain plateau.  At 3016 m it is inaccessible during winter months, and even in summer weather conditions can change rapidly. "The Last Lake" is considered one of the most beautiful areas for summer pasturing with an area of 270 km sq.  In winter the lake freezes over with ice more than a meter thick.

Nomads have been making the upland trek to this 3016 m asl lake since ancient times with their livestock.  Some left mysterious "standing stone" arrangements.

Lake Son-Kul is a beautiful place to experience life on a jailoo – summer pasture.  Ride horses in the surrounding mountains, or stay in a yurt and experience an old-fashioned Kyrgyz summer.

Today we will have briefing from 12 to 12.30 and lunch at times bar at the top of Ambassador Hotel. After that we will drive to Osh bazaar where we will walk to the main part where we will see many local people buying and selling different kinds of local bread, fruits, vegetables. Also in this bazaar we will see many another sections with different salads, sweets and all another kinds of provision. After main part of bazaar we will also visit the part with different kind of clothes, national felt carpets, footwear, hardware and so on. It is a good opportunity to see local people and feel the rhythm of Bishkek life. From Osh Bazaar we will drive to hotel and have free some free time. We will go for the dinner to restaurant. 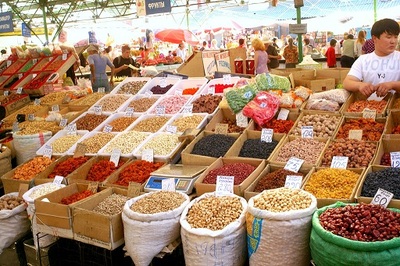 Day trip to Ala Archa Gorge

Morning transfer to the neighboring mountains for a day hike (will be in Ala-Archa Gorge or in Kashka Suu ski resort area). Lunch en route.  Drive to Ata Beyit Memorial Complex dedicated to the victims of Revolt against Tsarist Empire in 1916, victims of Stalin’s Repressions 1934-1938, and victims of 2010 Revolution.  Return to Bishkek. Accommodation in hotel. Dinner.

After breakfast we will drive to Ala Archa gorge direction for 45 min and turn from main road to Kashka Suu ski center where we will take ski lift and go up to highest point where we can have some coffee and tea and observe Bishkek and Chuy valley. From the top we w will walk for approximately 1.5 hour down. After that we will make short drive to Ata Beyit Memorial Complex dedicated to the victims of Revolt against Tsarist Empire in 1916, victims of Stalin’s Repressions 1934-1938, and victims of 2010 Revolution. After that we will drive to Bishkek and visit see Old Square with Lenin monument,  Ala Too Square with flag, guards and National Historical museum, in a sunny day we can see peaks of Kyrgyz Range at the south of Bishkek. After that we will have some free time. Dinner at restaurant. 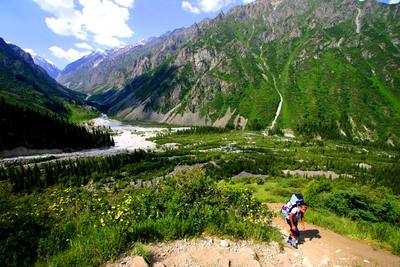 This day drive to Chong-Kemin Valley. 3.5 hours drive in total. Visit the Burana Tower architectural complex (10th-11th century, Balasagun – the capital of Karahanid kingdom, an important point on the Great Silk Road) on the way (15 km from the main road, 1 hour). As the Karakhanid rule was shaken by Mongol invasions, Balasagyn began a slow decline, eventually becoming a ghost town in the 15th century. We will see Burana Tower itself (24.6m high) it was a minaret and also a watchtower, Historian’s believe the top half to have been destroyed in a 15th century earthquake, collection of  Balbals –   gravestones made mostly from 552 to 960 BC. Also we will visit small museum. From Burana we will drive to Tar Suu village in Chon-Kemin valley.  Arrive in Chong-Kemin.  Accommodation in a local guesthouse, which is located near mountains.  Lunch upon arrival. Hike to local panorama 2.5h. In the evening small music program with drinks and campfire. Dinner. Overnight in local guesthouses. 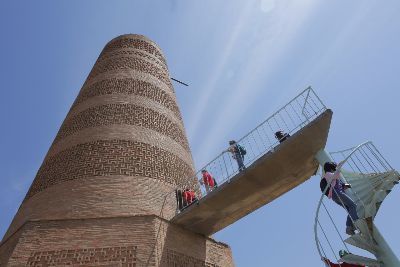 After breakfast drive to Karakol (about 5-6 hours). In Cholpon-Ata take a boat tour (1 hour). We will move away from the shore for 20 min and stop the engine and see all shores of Issyk Kul lake and 2 mountain ranges with snow covered peaks. After short drive we will make a stop to visit an open-air petroglyph (rock painting) gallery (5km from Cholpon-Ata, heading to the mountains). Lunch en-route with local family. Where we will make a short stop to stretch legs. Arrival in Karakol.  Accommodation in a hotel. Dinner. 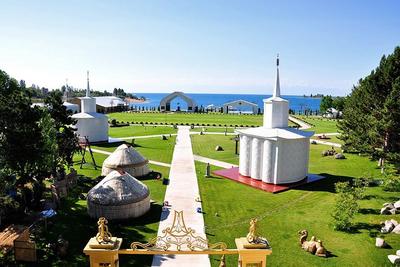 Today is Karakol Sunday Animal Market. After early breakfast visit the market. The famous animal bazaar. Shepherds from surrounding regions travel long hours to bring their livestock— on foot, by cart, by tractor, by car— even by motorcycle. While we will walk there we will walk in section where before entrance people sell sheep and goats. Inside mostly we will see big animals. Sellers are mostly people from villages of Issyk Kul region and buyers are not only local but people from Bishkek and Tokmok animal market. The price changing a lot from one Sunday to another and even within one Sunday it can change from hour to hour. It is NY stock exchange where price for bonds changes in a seconds. We will also make a short visit to second hand car section of bazaar. Back to the hotel. City tour in Karakol:

Visit local Dungan Mosque - wooden mosque built by Chinese artisans for the local Dungans between 1907 and 1910.  Visit Orthodox Church. The story of the church goes back to July, 1869, when Karakol was basically a garrison town established as an outpost on the edges of the Tsarist Russian Empire. Drive to hotel. Later drive to the Dungan dinner with local family. 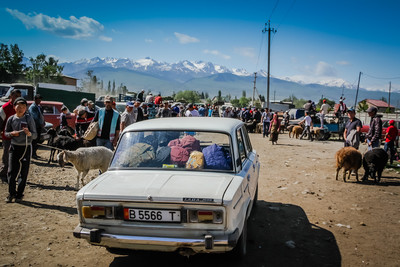 Morning transfer to the Jeti-Oguz (Seven Bulls) Gorge (about 45 km). Hike from forestry gate till shepherd’s yurt, further to Jeti-Oguz rocks.  Hike is about 2.5-3 hours. On the way we will pass by shepherds yurts, go to panorama place where we will see panorama. After that we will walk down and see Jety Oguz rock formations. Drive to Chyrak Village, lunch in a Kyrgyz Family. Chyrak is a typical village where every family has small farm, orchard and garden. We will see one family house where we will visit orchard and try berries and fruits (what is eatable that time) and after that we will have a lunch in side the house with tea from traditional samovar. And probably most interesting what we will see: horse games. This demonstration will be done by young horseman from the Ichke Bulun village who are members of Ulak Tartysh team well known in Issyk Kul region.

Accommodation and dinner in a yurt. 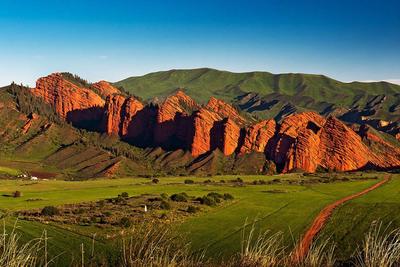 After breakfast we can have a hike to waterfall (2.5 km one way). On the way we will see better sand better view on mountains around, walk through the forest to the hidden waterfall and walk back to our camp. Lunch. After lunch another optional hike is up along the river. It can be 1-2.5 hours hike and and same way back to the camp. Diner and overnight in yurts. 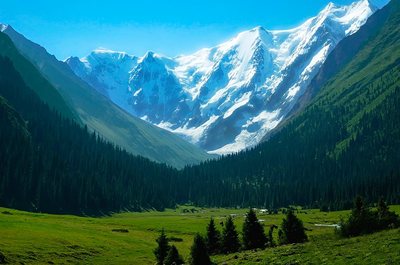 Leave to the southern shore of Issyk-Kul lake. On the way visit Skazka Canyon (Fairytale Canyon), 1 hour.  Drive to Bokonbaevo village. Lunch at local family house. Hike to Issyk Kul lake panorama (2 hours). Drive to Jaichy yurt camp. This camp and big farm nearby belongs to Batyrbek Akmatov and his father Tashtanbek was a shepherd in local kolhoz (cooperative) but later became a Chairman of the Supreme Council of the Kyrgyz SSR (1987-1990). We will also see small historical museum and also museum of Tashtanbek Akmatov.  It will be interesting to talk with family and see their farm. Accommodation in a yurt camp. Dinner with national music. 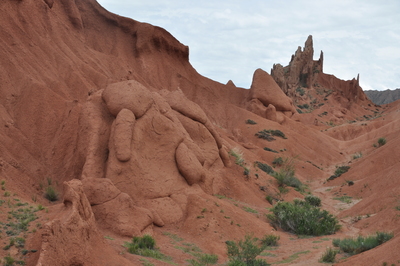 Morning experience Hunting with an Eagle. Today we will meet with eagle hunter Ruslan and his 2 eagles. He will tell us about this old tradition. How important it was in the past when people didn’t have rifles yet. We also will learn how he trains eagles and of course will see hunting demonstration. Each guest also can take on leather glove while eagle is sitting on it. Good moment for photo. After this we will drive for 45 min approx. to Kok-Sai Gorge. Walk up to Kara-Choku mountain and back (3,5 hours together with Panorama). Picnic lunch. Walk down to panorama and down to road. Transfer back to yurt camp. Dinner and B&B in yurt camp. 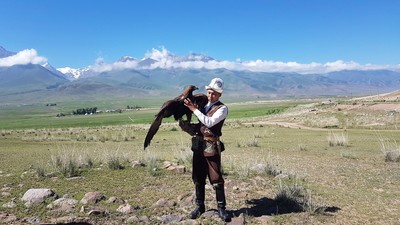 From Issyk-Kul Lake to Song-Kol Lake

Morning transfer to Song-Kol Lake. En route stop in Kyzyl-Tuu village, the Village of Yurt makers. Visit a Kyrgyz family where all family members make a Boz Ui (Yurt) – a traditional Kyrgyz dwelling tent. Group of 6 people can build it in 30 minutes or even less. Further transfer to Song-Kol Lake (9895 ft asl).  Song Kul lake is probably a best place to see nomads life because there is no any village and shepherds come to pastures around the lake with this herds and on autumn return back to their villages. It is a paradise place for summer holiday for all horses, sheep and another animals taken here by shepherds. Also since there is not any light pollution it is a good place to see stars at night. Lunch en route on the way to Song-Kol Lake. Hike from picnic lunch place to the lake shore. Drive to the yurt camp. Dinner and accommodation in the yurt camp. 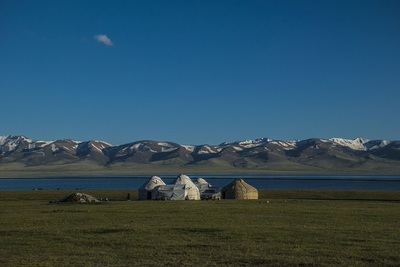 Walk to Jalgyz-Karagai Pass and hope the legendary Song- Köl weather is kind (5 hours hike). We will first walk to Jalgyz Karagai pass (11276ft) and from the top we will see the view at Song Kul lake and summits of Jumgal Range. We will walk back and visit shepherds where we will watch and/or participate in the everyday life of the shepherds: milking mares; making traditional Kyrgyz milk products like kymyz (fermented mare’s milk) or airan (a sour, dense milk product); tending cattle. Dinner and overnight in the yurt. 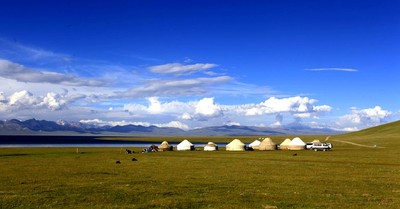 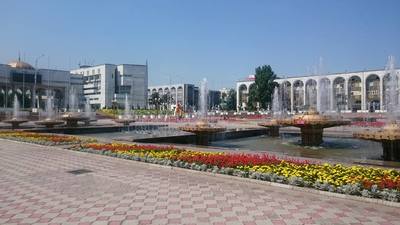 Transfer to the airport. Departure.